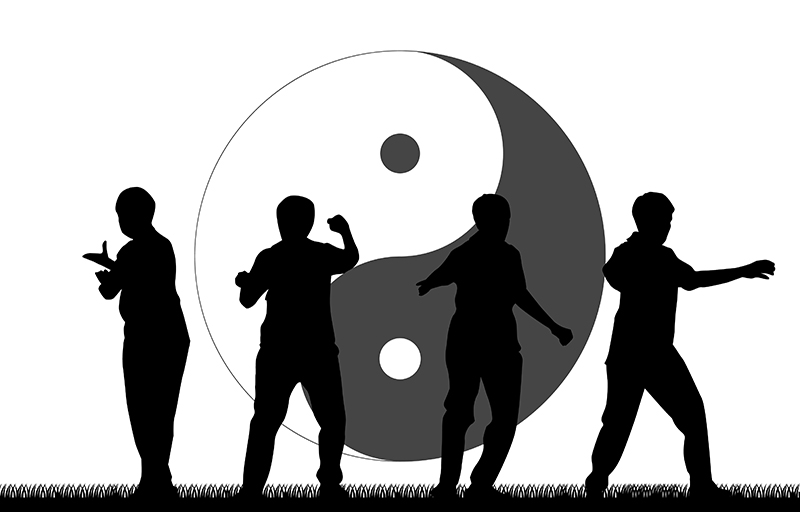 The 108 Traditional (or Standard, or Segmental) Form is the treasure chest of the style, as Master  Wu Kwong Yu says, as within it lie all the principles, the techniques and the secrets of Tai Chi Chuan.

The 108 Round Form has the same series of movements with the 108 Wu Style Traditional Form. However, these two forms are quite different because unlike the Traditional Form that stresses the detailed straight line movements and strong postures, the Round Form stresses circular movements and the body moving as a whole. The movements cease to have many straight lines and “corners” and the details seem to vanish. However, in actuality the details merge into the circular patterns and become part of the whole movement. After long practice in circular movements, the student learns to perform the form in different speeds, from very slow to very fast. For all the reasons above, and many more, the 108 Round Form can be practiced only by advanced students, because it is very demanding. A student must be very experienced in order to maintain the quality and the details of the Form while performing it in various speeds.

The 54 International Competition Round Form was created by Master Wu Kwong Yu, assisted by a committee of Family Members and Senior Disciples. Through this form, Wu Style students have the ability to participate in international and local championships. The Form is aligned with the international tournament regulations and is very round and fluid. Thus, it impresses the audience (and the referees!) although it does not deviate from the principles and the quality of Wu Style Tai Chi Chuan.

This Form can be taught in coaches and athletes of Wushu or other styles of Tai Chi Chuan who do not wish to dedicate themselves to Wu Tai Chi Chuan, but only to participate in championships with this Form.

Master Wu Kwong Yu was invited in 2008 by the Chinese Wushu Association to design the two person sparring forms for teaching in schools, colleges and universities. He designed six sparring forms representing Wu Style which now form part of the Wu Style Tai Chi Chuan examination criteria in the Chinese Wushu Duanwei (grading) System.
Each level has a theme and consists of the Solo Form (Upper/Lower Hand combined), the Two Man Sparring Form and applications.

The 21 Simplified Form, as its name implies, is a simple, short form. It is suitable for students who cannot perform the 108 Traditional Form either because of lack of time or because they just want to “get a taste” from Wu Tai Chi Chuan, without dedicating much time. In spite of this, the Simplified Form is based wholly on the principles of the style, and the serious student may be much benefited from it. By the term “simplified” it is not meant that the movements of the form are simplified so that they can be performed by anyone, but that the movements of the form are few and there are not many and complex repetitions.

This Form is especially created in order to teach the children the principles of movement of Tai Chi Chuan. Special care is taken so that the Form attracts the children’s interest and does not tire them. Tai Chi Chuan is an ideal system of exercise for children, because it respects their soft body. Not only it exercises their body in a correct, balanced way, but it cultivates their sensitive personality. Tai Chi teaches children to love their body, to practice self-observation, to cooperate with nature and to abandon antagonism. The myth that holds that Tai Chi Chuan is suitable only for adults must be vitiated – it is absolutely incorrect. We have been teaching Tai Chi Chuan to children since many years, and we know that the only thing it takes them to love it totally, is to learn it in a way that is agreeable with their nature. And this training must be free from stereotypes, which are anyway wrong.

(For very elderly or disabled persons in wheel chair)

The 32 Sitting Form was created by Grandmaster Wu Kwong Yu, when he was teaching paraplegic patients, patients with disorders of the lower limbs or the elderly. While Grandmaster taught these people simple Chi Kung exercises, he discovered that they wished to strengthen their body and spirit and improve their quality of life, through a more complete practice of Wu Tai Chi Chuan.

After many years of research and teaching, and taking into consideration the needs of paraplegic patients, Grandmaster Wu refined the 32 Sitting Form, gaining praise from the other members of the Wu Family, from all Tai Chi Chuan practitioners, as well as from the people for whom this particular form was created. In the long run, all those who practiced this form came to love it, as they were highly benefited physically and mentally.

The distinctive features of the Sitting Form is smoothness, circularity, the soft stretching of the whole body, the use of gravity and calmness. The Sitting Form comprises all the principles of Wu Tai Chi Chuan.

We use cookies on our website to give you the most relevant experience by remembering your preferences and repeat visits. By clicking “Accept All”, you consent to the use of ALL the cookies. However, you may visit "Cookie Settings" to provide a controlled consent.
Cookie SettingsAccept All
Manage consent

This website uses cookies to improve your experience while you navigate through the website. Out of these, the cookies that are categorized as necessary are stored on your browser as they are essential for the working of basic functionalities of the website. We also use third-party cookies that help us analyze and understand how you use this website. These cookies will be stored in your browser only with your consent. You also have the option to opt-out of these cookies. But opting out of some of these cookies may affect your browsing experience.
SAVE & ACCEPT